By Nicholas A. Henderson

On June 1st, 2021, the article “Quiet Storm” posited that Taiwan’s latest outbreak of COVID-19 was under control due to an effective policy response. Over the course of June, interesting new data points have emerged, warranting an update on Taiwan’s COVID-19 Outbreak.

This update aims to demonstrate how Taiwan’s policy response and its culture of wearing masks have both effectively controlled the latest outbreak of COVID-19 on the island. As of the writing of this piece, no other reports or articles have analyzed the COVID-19 death rate in Taiwan as it relates to the daily new case count and the government’s policy response, which makes this article a unique perspective on Taiwan’s outbreak.

Taiwan’s Level 3 Lockdown began in both New Taipei City and Taipei on May 15th, extending to the rest of the country by May 19th. Level 3 implemented major policy changes aimed at controlling the outbreak, including:

The data measured includes daily average new case count, rate of infection, the positivity rate, and death rate. The most significant developments in the data since June 1 are: first, a decline in the total case count; second, a stark negative slope in the seven-day average of community spread over time; and third, a clear inflection point marking a peak then negative slope in death rate. The data confirms the assertion of the June 1st article that Taiwan’s effective policy response, coupled with a culture of mask-wearing and 面子 (mianzi) – the social construct of self-worth and standing in Taiwanese society – have curbed the latest outbreak of COVID-19.

The data collection and analysis methodology have largely remained the same as those used in the June 1st article. All numbers are sourced from the Taiwanese Centers for Disease Control (CDC) and updated as new numbers emerge. A seven-day rolling average was chosen because it smooths out any variation in the data, and assists in identifying long-term trends.

In contrast to the initial explosion of cases, the slowing in the rate of infection is largely due to cooperation from people living in Taiwan. The graphs indicate that as people worked together by wearing masks and adhering to other Level 3 policies, the spread of the virus slowed. The front-loading of a high number of cases from May 16th until approximately May 28th is due to reporting of cases from before the introduction of Level 3, while the slowing rate of transmission between May 16th and May 28th indicates that people living in Taiwan were actively participating in slowing the spread of COVID-19. 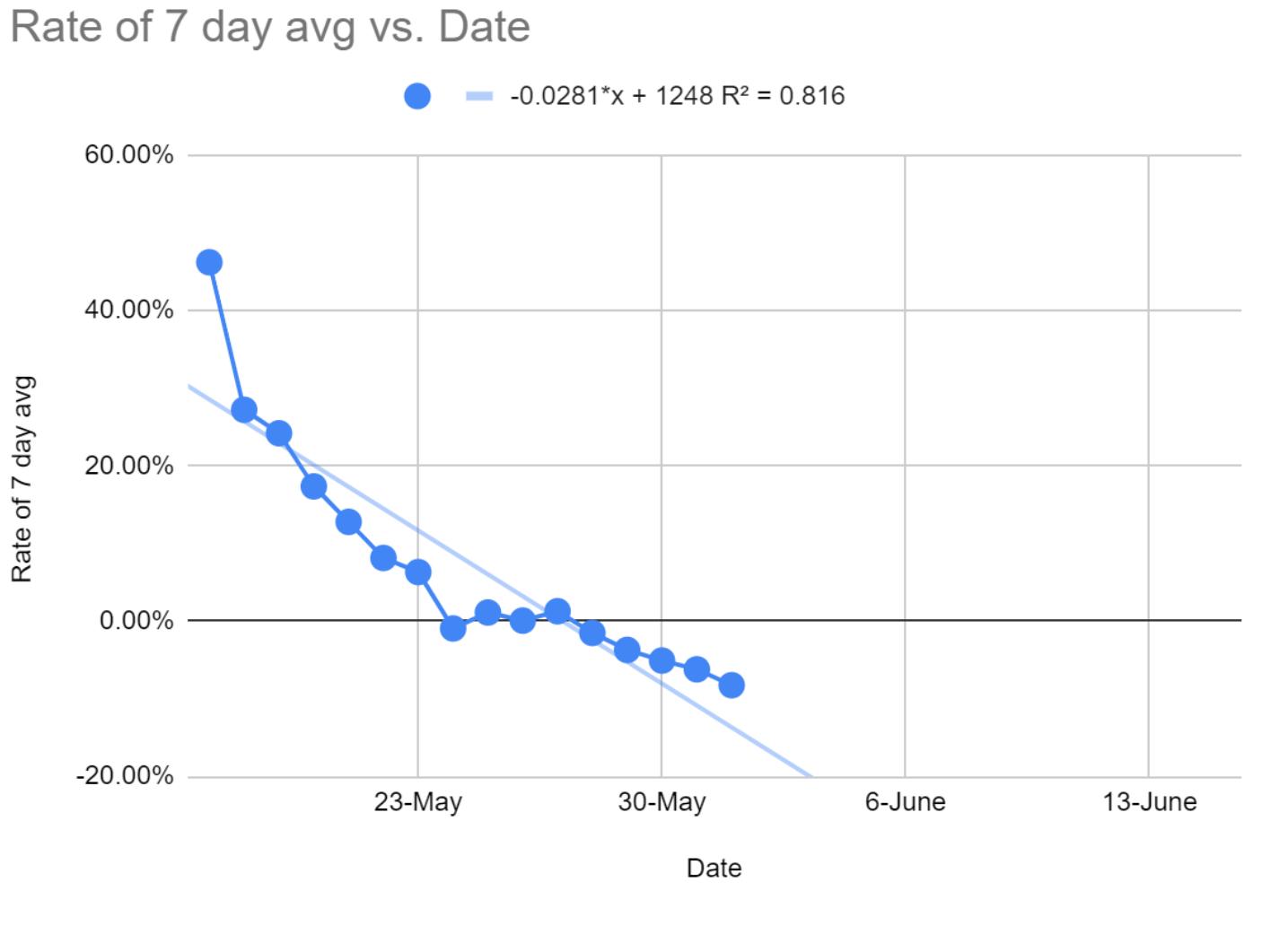 In a shift from the original graph (see Figure 3 above) in the June 1st article, we can see that the inflection point of positive cases was likely May 28th or 29th. Although there was a small spike on June 5th as shown in both Figure 2 and Figure 3, this spike is an outlier caused by a small cluster in Miaoli County of 66 cases in one day, which was quickly isolated and brought under control. Overall, the data marks negative growth in COVID-19 since May 28th, a full two weeks after the introduction of Level 3 restrictions. Ultimately, Taiwan’s policy response has resulted in a steep negatively sloping trend line.

Since the publishing of the June 1st article, Taiwan’s positivity rate has also steadily declined. The negative slope trendline demonstrates that the pandemic control strategy is working, as the rate of infection has slowed to about 0.60%, or 60 basis points (this is calculated by dividing positive cases by the number of total people tested). The lowest positivity rate being June 29th, the most recent measurement as of writing this paper.

On average, the data indicates that COVID-19 patients are most severely affected by the virus 24 days after infection. This means that the average timeline, starting from the first signs of infection until death is roughly 8-10 days. Because symptoms of the virus can take anywhere from 2 to 14 days to develop, the death rate can be expected to increase at least 10 to 24 days after initial infection, with some outliers.

Figure 4 shows the deaths per day, 7-day average, as well as the 7-day average death rate. As established in the previous section, the 7-day average new case count data has been declining since May 28th. Furthermore, we can also see that the inflection point in the death rate was on June 11th, which was the final day of positive growth until June 21st. The inflection point occurred 28 days after Level 3 went into effect in New Taipei City and Taipei and 24 days after the nationwide Level 3 alert began. The stark drop in the death rate is depicted in Figure 6.

Data from Figure 5 represented in Figure 6 above indicates that beginning on May 24th, 20 days after this recent outbreak began, the death rate grew exponentially. Both the data in Figure 5 and graph representation in Figure 6 show that Taiwan’s death rate has effectively peaked, with the inflection point on June 11th, 24 days after Taiwan introduced Level 3 COVID-19 restrictions.

The 7-day average death rate shown in Figure 7, a lagging indicator that did not exist on June 1st, also reveals that the government’s pandemic response policy has been effective in slowing the spread of COVID-19 in Taiwan. As we can see from Figure 7, the red regression line demonstrates a clear negative slope, consistent with data in Figures 1, 2, and 4, which show the speed of infection slowing, and Figures 5 and 6, which depict a clear peak in the number of deaths.

The data indicates that the initial assertions made in the June 1st article “Quiet Storm” are accurate. Taiwan’s outbreak is under control, this is a direct result of the Taiwanese Government’s policy response, and the people in Taiwan wearing masks, and adhering to Government mandates.

What we can take away from this is that a democracy can effectively and quickly fight an aggressive pandemic if the population supports the coordinated response of the national government. Taiwan’s COVID-19 response has protected the lives of its citizens. Vaccinations have been purchased by both the Taiwanese government and private entities like TSMC and Foxconn. In addition, Taiwan’s allies like Japan and the United States, have donated to Taiwan’s vaccine stock. Thanks to combined efforts, Taiwan is set to increase vaccinations. Taiwan’s Health Minister Chen Shih-chung (陳時中) expects about 60% of the population to have at least one-dose of the COVID-19 vaccine by October of 2021.
Taiwan’s expertise and data-driven approach to pandemic policy could be implemented in other countries. The “Taiwan model” to pandemic response could help other nations be better prepared in the next pandemic, which is “likely to happen again and again.” In short, just as President Tsai Ing-wen (蔡英文) put it: Taiwan can help.

Nicholas A. Henderson is a Master’s candidate and Boren Fellow at the Johns Hopkins School of Advanced International Studies (SAIS) in Washington, D.C., where he studies International Economics and Mandarin Chinese. Nick currently lives in Taipei, Taiwan where he is finishing his thesis on supply chains and the Taiwanese semiconductor market. Nick can be reached at nahenderson@protonmail.com.