As COVID-19 spreads around the world, new fissures have been exposed in the U.S.-China relationship. During this period of crisis, when mutual cooperation between countries, institutions and global citizens is vital, domestic and foreign policy agendas have continued to drive a wedge between the two global powers. Both the Trump and Xi administrations have used the COVID-19 pandemic to attack and scapegoat each other, rather than focusing on major policy issues or pursuing new avenues for cooperation. Although the current health crisis is creating stressors for the global community, increased enmity precipitated by the pandemic could provide the spark that ignites the powder keg into a hot war between the US and China.

In White House press conferences, former President Trump has referred to the  COVID-19 pandemic as the “Chinese virus.” This terminology provoked backlash from Beijing as well as Asian and Chinese Americans, who feel that Mr. Trump’s rhetoric is discriminatory and further fueling the fire of racism and bigotry, on top of the already existing racism plaguing American society. Concurrently, within the ranks of Xi Jinping’s government, the Foreign Ministry spokesperson Zhào Lìjiān (赵立坚) has pushed a conspiracy theory proposing the virus was planted in Wuhan by the U.S. military, implying that China was not the source of the outbreak and that a department of the U.S. government actively chose to spread this disease as a bioweapon. China’s new wave of wolf-warrior diplomats have further escalated tensions and damaged the U.S.-China relationship. The pandemic has further strained relations between the two countries in an era when, according to Dr. David Lampton, a scholar of Sino-U.S. relations, the relationship was already at a “tipping point.”

As international cases of COVID-19 grew, China enacted restrictions on foreigners entering the country and distributed propaganda that has led to discrimination against expats and foreigners, many of whom call China home. The U.S. Department of State released a security alert warning American citizens of discrimination against people of African descent in Guangzhou. The memo stated that “police ordered bars and restaurants not to serve clients who appear to be of African origin,” and that “local officials launched a round of mandatory tests for COVID-19, followed by mandatory self-quarantine, for anyone with African contacts.” China’s rise in nationalism has resulted in hostility and growing backlash towards foreigners. As the Biden administration ascends into the oval office, the US and its allies will most likely continue its hawkish stance towards China.

The ideological conflict between the U.S. and China has not been limited to the current public health crisis. In March, U.S. Secretary of State Mike Pompeo announced that five Chinese media outlets would have to reduce their staff in the U.S. by 40%, due to their connections to the Chinese government. Shortly thereafter, 13 journalists working for the New York Times, Washington Post, and Wall Street Journal were exiled from China. Chinese authorities also arrested and detained one of its own citizens, a Bloomberg reporter based in Hong Kong, in accordance with endangering national security, therefore further putting pressure on foreign media outlets. This battle over media access is yet another arena in which China and the U.S. are competing for soft power. However, as their rivalry progresses, the two governments may run out of space on the ideological and media fronts and instead, turn to more forceful conflict.

With continually rising infections and deaths, economic shutdowns, and quarantines, a new cold war may be cemented, as a worsening prolonged pandemic could lead to increased distrust between the world’s two superpowers. There is a sub-category of U.S. and China foreign policy experts who have focused on analyzing Sino-U.S. relations through a “New Cold War” framework. Minghao Zhao, a senior fellow at IIS Fudan University, stated in his article Is a New Cold War Inevitable? Chinese Perspectives on US–China Strategic Competition, that “to America, China is a distinctive rival comparable to Nazi Germany, imperial Japan, and the Soviet Union.” This cold war framework would be dominated by ideological differences between American democracy versus Chinese communism. However, perhaps this new cold war theory will soon be rendered irrelevant, as the two countries tip over into a new stage of conflict, ignited by consequences of the pandemic. In light of these historical assessments, it is imperative that both sides channel their energy and resources to avoid a “hot war” through trade offs, greater diplomatic cooperation, transparent channels of communication and a rejection of zero-sum strategies.

Minxin Pei, a professor of government at Claremont McKenna College, believes that constraining the growth of China has become a bipartisan goal within the U.S. According to Pei, a best-case scenario for China would involve the party transforming itself into a “kinder, gentler” regime, endorsing economic and political reforms, while also seeking reconciliation with the U.S. Although these Chinese Communist Party (CCP) governance reforms would lead to a more efficient market economy, more innovation, and increased personal freedoms for Chinese citizens, they are highly unlikely to occur. The Xi administration has spent years tightening its grip on power and exerting more government control, with the aim of ensuring the Party’s survival and maintaining the status quo of economic growth and social harmony. Xi’s commitment to Party control makes reform increasingly unlikely and reaffirms the argument that China is moving closer to a ‘New Cold War’ with the United States. As tensions continue to boil, the two countries could shift from a “New Cold War” into a direct military conflict.

For years, proponents of a stronger relationship between China and the U.S. have argued that economic interdependence between the two nations would prevent overt hostilities. However, as COVID-19 continues to wreak economic havoc and disrupts global supply chains, aggrandized conflict could emerge. The crisis will further isolate countries, leading to de-globalization and more cracks in the Sino-U.S. economic relationship. Heightened tensions and conflict could stem from a U.S.-China rivalry over scarce vital medical equipment and medicines to treat patients impacted by the pandemic. According to a Department of Commerce study, 97% of total antibiotics in the U.S. came from China. Over-reliance on key medicines and COVID-19 related drugs and medical equipment imported from China puts U.S. national security at risk, especially as hard-hit nations experience supply shortages. According to the Peterson Institute for International Economics, “China is an almost irreplaceable supplier, making more than 40% of the world’s imports of masks, gloves, goggles, visors and medical garments.” If the COVID-19 virus, as well as new viral strains continues to spread, compelling countries to endure multiple phases of infections and lockdowns, each government may choose to protect their key medical resources, breaking economic relationships.

While the pandemic continues to rage, China and the U.S. are each building up their military capabilities, particularly in potential zones of direct conflict (i.e. Cyber, cross-straits tensions, South China Sea). According to the Stockholm International Peace Research Institute (SIPRI), China’s “defense spending increased more than sevenfold, from $31 billion in 1998 to $239 billion in 2018.” A recent post-pandemic proposal delivered to Congress by the U.S. Indo-Pacific Command requests “$20.1 billion in additional spending between 2021 and 2026” to bolster military deterrence against the People’s Liberation Army (PLA). As Dr. Lampton argues in his 2015 speech, “perceived security threats trump economic and cultural interests, this suggests that admittedly enormous shared economic and cultural interests may not prevail over diverging security concerns.” Beyond the economic and trade disputes, China’s human rights violations, and the general antipathy both administrations have for one another, COVID-19 is exposing cleavages between the two societies that could push Sino-U.S. relations past a tipping point. 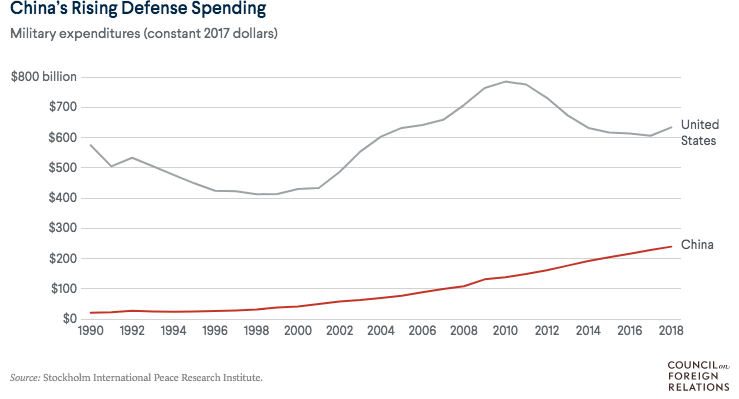 Western media has criticized China’s diplomatic initiatives and transparency during the outbreak of COVID-19. Subsequently Xinhua, a Chinese state-run media outlet, published an editorial which alluded to the CCP seizing on the opportunity provided by American disarray. Chinese media reiterated to a global audience of the superiority of Chinese aid, while highlighting other countries’ missteps and criticizing the incompetence of the ‘elite’ in Washington. As China is the largest manufacturer of protective masks, it has been able to provide aid and medical equipment to many countries battling COVID-19. These donations align with China’s current diplomatic goal of being seen as a ‘savior’ for distressed states and a global bastion during this critical juncture. In contrast, China hawks in the U.S. have leveraged the CCP’s early mishandling of the coronavirus to attack the party’s leadership and legitimacy. Former Trump White House advisor, Stephen Bannon stated that, “I honestly believe we’re getting the nomenclature wrong. This is not a Chinese virus. This is a ‘CCP Virus.’” Mr. Bannon, a staunch China hawk, believes that hard line COVID-19 rhetoric from Washington needs to be specifically aimed at the leaders of the CPP, and not at Chinese citizens — who he sees as victims of the system they live in. Washington analysts are eagerly following internal developments within the CCP, and are waiting to see if the Party will come out of the pandemic weaker or stronger. In these dire times when saving lives and minimizing the deadly ramifications of COVID-19 should trump ideological differences, it is crucial that Sino-U.S. relations do not spiral into a self-fulfilling prophecy of a Thucydides Trap (a theory stating that war is more likely to occur when an emerging power threatens to displace an existing great power as the international hegemon). In 1979, China and the U.S. normalized diplomatic relations on the basis of mutual economic cooperation and trade. Although economic ties and globalization have ‘coupled’ the two nations together across the last four decades, major ideological, political, economic, and cultural strife persists. The COVID-19 outbreak is a critical moment for Sino-U.S. relations. The fallout from the pandemic may test the liberal theory that economic interdependence acts as a deterrent for war, especially as the US and China struggle for hegemony on the global stage.

Michael is a MA candidate at Johns Hopkins University SAIS and the Hopkins-Nanjing Center studying International Economics (Strategic & China Studies). His research interests include US-China economic relations (technological rivalry) and economic security issues. He earned his B.A. in International Relations (Economics) and China Studies from The College of Wooster.